Over the last 50 years, Al Fairuz has established itself as one of Oman’s leading companies, growing steadily and playing a pioneering role in the Sultanate’s socio economic development.

Although Al Fairuz was commercially registered as a company in 1972, the company’s presence as an active player in Trading Business began as early as 1960. Before the Renaissance, we were a major wood exporter from Oman to various countries in the Gulf region. We were also into the business of selling dry lemon and diesel for farmers. In early 70s, the company started importing and distributing water pumps, diesel engines, spare parts and other equipment for farmers. We expanded our operations to automobiles, by starting the distribution of various Japanese and European cars, Trucks and Heavy machinery.The early 1980s saw the emergence of Al Fairuz as one of the leading construction companies in Oman, engaged in infrastructure building projects. The rich experience in agriculture related activities was channeled into setup of a largest Banana plantation in the Middle East. Pioneering work in the animal husbandry industry was initiated by Al Fairuz Group by way of setting up of a state of the art camel breeding facility in association with Tehran University for breeding of local Batinah camels. The company also diversified into other activities such as Boat manufacturing, Fish processing, Fertilizer Industry, Iron Ore and Copper Mining, etc. At the same time, the parent organization, Al Fairuz Trading & Contracting Co. LLC, reinforced its business activities by entering into distributor agreements with major international manufacturers of construction equipment, heavy duty Trucks, military vehicles, etc. The company has now grown into a strong well known entity in the Sultanate’s business environment, providing high quality products, supported by a strong after sales service and spare parts network.

Under the wise leadership of His Majesty Sultan Qaboos Bin Said Al Said, Oman is marching confidently into the 21st Century with a vibrant economy that promises a bright future for all its citizens. Al Fairuz continues to be a crucial contributor in this plan by way of reinforcing the current business activities as well as diversifying into new areas and ventures. 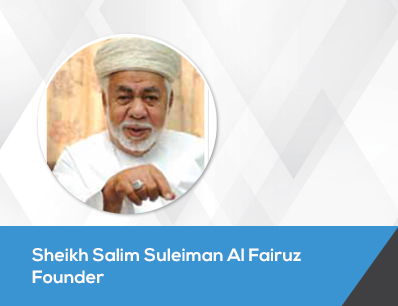